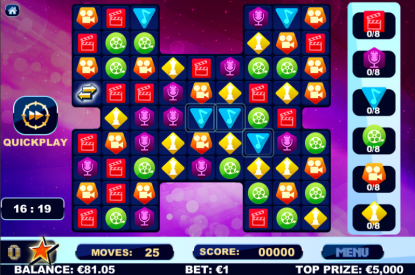 Glück Games, the Gibraltar and Berlin-based developer of scratchcards, instant win and lottery games for the iGaming sector and LottoInteractive, creator of immersive, skill-based mobile games integrated with instant-win mechanics, have launched a first-of-its-kind crossover experience in Star Match.

Star Match will launch as an instant win initially. This will be quickly-followed by an interactive scratchcard. Both products will be available across Europe on Lottoland.com. In addition, several other operator partners will be announced soon.

In Star Match, players try to match three or more Hollywood icons to collect as many stars as possible, gaining points and bonuses along the way before the digital lottery cash prize is revealed. LottoInteractive and Glück Games have collaborated to provide a prize tier in the scratchcard that awards free plays in the instant win game, an innovation that will drive cost-effective user acquisition.

Glück Games’ CEO, Robert Lenzhofer, commented: “As an iGaming developer with a focus upon the ‘casual real-money gaming’ crossover, we are very excited to introduce the skill-based playing experience that Star Match provides to our ever-increasing player base.”

LottoInteractive’s CEO Brian Ward added: “We are delighted to work with such an innovative partner as Glück Games, and to bring the North American success of Star Match to much larger European audiences, offering a skill-based experience and mobile game mechanics that younger audiences have come to love.”