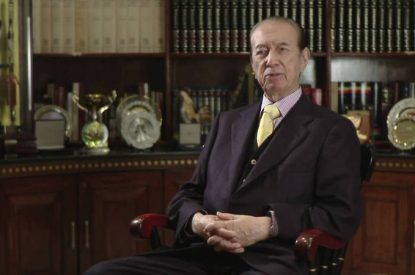 Stanley Ho, the man who built the Macau casino industry, has died at the age of 98 at the Hong Kong Sanatorium Hospital.
Mr. Ho founded SJM Holdings, valued at around $6bn, and held a monopoly for casino gaming in Macau until 2002 when the enclave licensed five other operators to operate casinos.

Stanley Ho’s daughter Pansy Ho said: “In Hong Kong, Dr Ho had been someone who carried a lot of weight, was highly respected and cherished Hong Kong. We hope to follow our father’s footsteps and carry on the responsibility of giving back to the society.”

Shares of businesses with shares in the family empire, boomed on expectation of ownership changes involving family members.

Kenny Ng, a Hong Kong-based analyst at brokerage Everbright Sun Hung Kai, said: “The market is expecting a scramble for inheritance. Under these circumstances there might be changes in company ownership, with some shareholders increasing their stakes.”

Steven Leung, a sales director at UOB Kay Hian, said: “Investors are keen on SJM in anticipation that it will become more aggressive in its business approach on the back of stronger control of the company and closer ties among its major shareholders.”

“In those days, the Portuguese said Stanley Ho was a dreamer. I have fulfilled all my promises,” Mr. Ho said in 2001. “I feel rather proud in having succeeded.”