ICE – Alberici showing its range of changers, validators and acceptors 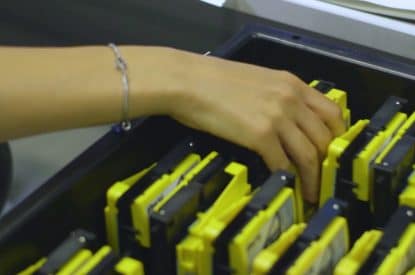 The main peculiarities of these series are the new core and the new plunger, both parabolic, resulting from the unceasing research carried out by the R&D department; in fact, their parabolic structure creates efficient light reflection and brightness intensity never reached before.

A patented 5-L.E.D. PCB is also available as an option, to enhance the brightness features of these push-buttons. This smart illumination system has been purposely conceived for these new series, but it will be also available for many other Alberici push-buttons.

The PL-MY push-buttons, characterized by an easy and firm snap-in mount, are available in several and different shapes; they can host, as well, any of 9 different sockets, seven of which are completely new.

Thanks to the top quality material used, the specifically designed sockets and illumination devices, their revolutionary parabolic structure, and the eye-catching chrome finishing, these new illuminated push-buttons create a better user experience for the player: indeed, a must-have product for each gaming machine manufacturer.

But the attractions at ICE don’t stop there: Alberici is going to show its new generation of coin acceptors, including the FG, the AL66 v. 3, and the high-speed SV.

These new series of coin acceptors boast the 32-bit/128K ARM processor, as well as a new detection hardware and software purposely developed to produce 13 parameter sets (12 of them dynamic), meaning that the system chooses among a range of 108 floating parameters the 12 combinations that are most discriminating for the coin under measurement and for the relevant reading conditions. The result is a discrimination rate never reached so far. The ARM processor is installed on 4-layer PCB, so that interferences and electrostatic charges are shielded off from the reading process. Extra optic protections have been added to the several existing ones, to inhibit any type of fraudulent trick.

Among the coin acceptors, the high-speed SV is a very particular model: this 3” device can read up to 10 coins per seconds. Its wide-spectrum inductive sensors, matching with the advanced features of the ARM enhanced processor, provide such a prompt and precise feedback to allow for fast and accurate coin processing.