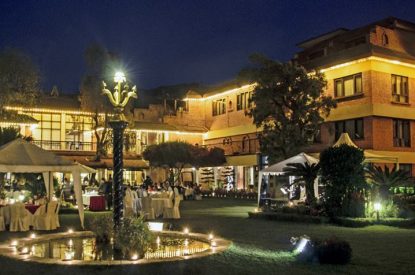 The Nepalese government is poised to approve Hong Kong-based Silver Heritage Limited to operate a casino at the Shangri-La Hotel & Resort in the capital of Kathmandu.

Silver Heritage, who will operate the property alongside a Nepal-based company, will invest over NPR1bn (US$10m) in rebranding the Shangri-La casino as the Millionaire’s Club and Casino. It also runs casinos across the Asia Pacific, in India, Vietnam and the Philippines. It is preparing to ‘ open its doors during the first quarter of 2015.’

Millionaire’s Club and Casino will house 22 tables and 40 electronic gaming machines. The casino will be primarily aimed at providing expanded gaming opportunities for customers from the growing Indian and Chinese markets, and will also service the growing expatriate community living in Nepal.

Silver Heritage‘s Chief Executive Mike Bolsover said: “We are confident the Kathmandu opportunity and our development of other resorts in Nepal represent a huge opportunity given Nepal’s proximity to both India and China’s massive and growing middle class consumer, and Nepal’s cultural affinity with its southern neighbour.”

Tim Shepherd, Silver Heritage’s Chief Operating Officer, added: “We believe the work we are undertaking in Nepal will help the Nepali government achieve their goals by encouraging inbound tourism, particularly from India and China, and stimulating the local and national economy through our planned phased investment of more than US$100m in developing a chain of 5-star resort facilities across Nepal.”

Tulasi Gautam, Director General of the Department of Tourism, said: “The company has met all the requirements. After a joint-venture company is registered, we will forward the company’s proposal to the Tourism Ministry for its final approval. As gaming is one of the major tourism products, we want operators to become more competent and ensure their products are of an international standard.”
Star Management, a Malaysian company, had operated the Casino Shangri-La for the last four years but was forced to shut due to labour unrest.

The 5-star hotel resort will house 300 rooms. It is expected to open in 2016. Silver Heritage plans to open two more resorts in Nepal before the end of 2018.

The government took a hard stance against the casino industry earlier in the year.

New levels of tax were introduced on July 16, 2013 which doubled royalty fees with the government subsequently declaring all casinos illegal due to outstanding royalty fees and unpaid taxes.
Under the Financial Bill 2013 to 2014, casinos must pay Rs40m and slot halls Rs 30m each year although 10m was later slashed from this cost when casino operators said they couldn’t survive.