Isle of Man – Microgaming raises over £8,000 for Manx Cancer 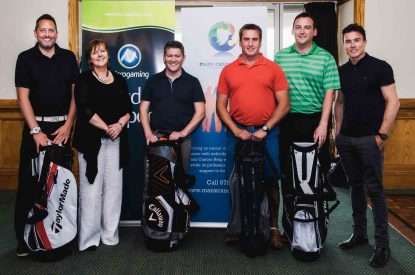 Eighteen teams took on the 18 holes of Mount Murray Golf Club and the AM-AM competition proved even hotter than the weather. At the finish, two were tied on 118 points with the winners – Continent8 Technologies – claiming the spoils for winning on the back nine, with Lloyds TSB in second and Barclays Bank in third on 114 points.

The fun-filled afternoon was spiced-up even further by the inclusion of a ‘Wild Ball‘, which proved decisive in the end with the winners beating their rivals due to the double points available. As well as heaping more pressure on the players, the Wild Ball also provided some welcome funds to Manx Cancer Help as only three teams returned to the clubhouse with both allocated Wild Balls, with 15 teams making donations due to their waywardness.

Buchanan MINI generously offered a brand new MINI One as a prize if anyone was skilled or lucky enough to get a hole in one! However whilst six spot prizes were claimed, nobody managed to ace the 11th hole. Rob Gardner playing for the Stewart Clague Services team came agonisingly close, but his well-aimed shot fell a few feet short of the hole.

Manx Cancer Help’s joint patron, former Superbike World Champion James Toseland, joined Microgaming’s team and admitted to not having picked up a club for three years due to a wrist injury, which led to lots of high-spirited jesting throughout the day.

After a buffet in the clubhouse, the prizes were presented with one lucky player winning a power caddy in the heads and tails competition. Nobody went home empty handed as Microgaming kindly provided high quality goody bags for everyone who participated.

Roger Raatgever, CEO of Microgaming said: “For a charity golf day to raise over £8,000 is fantastic. I think everyone who took part on the day would agree that it was a huge success; a brilliant round of golf for a very worthwhile cause. A massive thank you to the organisers and all of the companies that entered a team and helped to raise such a huge amount. Manx Cancer Help will benefit greatly from this donation.”

Andrea Chambers CEO of Manx Cancer Help commented: “What a fabulous first golf event! Thank you to Microgaming not only funding the entire event but for rolling their sleeves up on the day and helping with the event set-up, refreshments and prize giving. Microgaming kindly donated corporate tickets to any Chelsea match in the 2014/2015 season, which raised a whopping £2,000 in the auction! Thanks also to Buchanan MINI and Allyn Laing at the Mount Murray Golf Shop for their support, as well as everyone who took part in helping to raise so much money. It will go a long way in assisting us to maintain and develop the support and services we offer to those affected by a cancer diagnosis.”