Italy – Inspired signs up for VLT roll out with Lottomatica 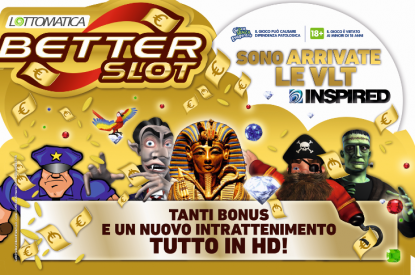 Martin Lucas, Managing Director of Inspired Europe and International VLT, said: “Lottomatica is a key player in the Italian gaming market and we are extremely proud to be selected as one of its VLT suppliers. Our Open VLT platform and library of games is bringing a new perspective into the market and it’s important to us that Lottomatica has recognised the extra flexibility and benefits our products provide. Inspired is focused on always innovating to supply our customers, such as Lottomatica, with the most cutting-edge technology platform, the most exciting games and top quality cabinets. We look forward to much success with Lottomatica over the coming years.”

Inspired will be providing Lottomatica players access to its popular portfolio of HD games including Treasure Island, Monster Cash, Pharaoh’s Golden Treasure and Super Diamond Deluxe. New game titles will be launched by the end of December.

For the initial launch, there will be two different gaming machines. The slim and upright Storm HD, which has 22” HD screens and a modern look and feel. For longer gaming sessions there is the popular and comfortable Evolution Slant Top, manufactured by Merkur Gaming.

As well as success in the VLT market, Inspired is also set to become the leading supplier of Virtual Sports in Italy. The largest supplier of Virtual Sports around the world, Inspired has already signed contracts with eight leading Italian operators and expects more deals to be announced soon. Inspired Games is also starting to provide its hit games, such as Treasure Island and Monster Cash, for Comma 6a (AWP), online and mobile gaming.