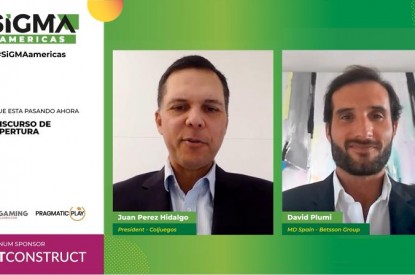 SiGMA Americas and AIBC Digital Summit were launched with great success in the past week, pushing the shifting grounds of the gaming industry towards LatAm and discussing the current developments in digitalisation

In line with a growing global portfolio of events, this week SiGMA launched its first foray into LatAm markets, with SiGMA Americas Digital. In a first for SiGMA, both the gaming and the tech segments of the conference were offered in 3 languages, English, Spanish and Portuguese.

This in itself, apart from being an advantage when it comes to expanding the reach of readers, audience members, and participants, is also a symbolic gesture of certain significance showing the first step towards the localization of the industry within the Americas.

The opening speech addressed the current state of the continent, what with the effects of COVID-19 and the way in which that affected the countries and the gaming sector, and what followed then, was an analyses of particular countries, specifically Brazil, Panama, Argentina, Chile, Mexico and Peru.

Complementing this microscopic approach, what followed were a panel solely addressing the importance of distinguishing the LatAm countries and their cultures, and a closer panel discussing investors and what would be the best ways for them to develop a healthy and positive relationship with LatAm.

The following day then started with addressing the rise of mobile technology in LatAm and how this impacted the industry, introducing the more technical, methodological and strategic side of approaching the market and addressing sports betting brands in football, sports betting beyond football, 2020, Covid-19 and the acceleration of a new era of gaming,compiling the human infrastructure for the industry in Latam, the issue of payments in LatAm and the issue of the necessary technologies for localisation.

The issue of regulation was addressed in detail because it is what will make or break the industry’s move to LatAm. Considering that there has been a significant growth in the number of operators in the last four years as the President of Coljuegs of Colombia, Jose Hidalgo noted, and that this naturally kickstarted a domino effect of interest, intrigue and operation that are still ongoing now, COVID also left an impact since it accelerated the normalisation of gaming in regions where it was not so popular before.

The negative financial effects of the pandemic on the countries’ economies is also something which can be solved through introducing the gaming industry, which would boost the tourism sector and also create a lot of jobs.

The SiGMA summit came to a 360-degree turn, with the word localisation bookending the topics of conversation, and so SiGMA very proudly hosted the summit with speakers from the Americas, such as the President of the Brazilian Institute of Legal Gaming, Magnho Jose and Manuel Sánchez Ortega, Executive Secretary of the Gambling Control Committee in Panama, expressing their opinions and concerns in their own languages, and having translators passing on English content to the interested parties who logged in to the summit from LatAm.

Concluding the three-day summit venture that was this week, SiGMA then launched the AIBC Americas Digital Summit, which discussed the same region, but with regards to blockchain, cryptocurrency and new financial methods and processes. The concluding essential requirement for the world of blockchain and cryptocurrency to keep on moving is to make it more user-friendly, cheap, and accessible. This was evident throughout the day as the following topics were addressed.

• Regulations of cryptocurrency in LatAm
• Case studies of successful supply chains
• The integration of blockchain, and the processes of DAO and Fintech
• A discussion on Smart Cities, especially in the wake of Covid
• Defiant practices of payment and how bitcoin is, and could be used in Venezuela
• A discussion on the Petro and government-backed digital currencies
• Crypto-assets across Latam
• An interview with Cointelegraph
• New ways of banking in 2020
• Finding financial freedom
• Crypto as collateral

With speakers such as Tim Draper, founder of Draper Associates and Richard Ellis, the CEO of Electroneum, the summit involved many different aspects of topics, relating from local perspectives of the Americas to foreign visions of the investors and entrepreneurs, to possible solutions to fix economies in certain countries and even offer locals, a way to hold on to their rights and fight political injustices through the use of digitalised finance.
The summit was a success with a total of 5000 delegates and 40 panels with 100 speakers, and it was also a confirmation that when there’s a will, there’s always a way, even with a global pandemic, and not only that, but it feels right that apart from the SiGMA Americas summit, the AIBC digital summit was also done virtually, making it a very apt occasion.

SiGMA will launch its next series of events in 2021, with SiGMA Europe headlining next year’s calendar. Inaugural summits in Asia and Americas are also set to dominate the year, with SiGMA Asia and SiGMA Americas launching in May 2021 and SiGMA Africa in 2022