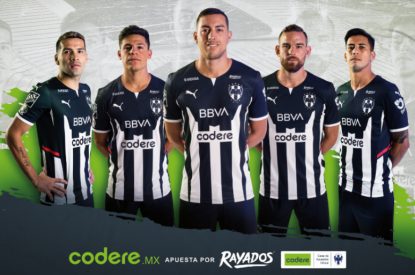 Codere has taken a step further in its sponsorship agreement with the Monterrey Rayados Football Club, of the MX League of Mexico, raising its category to main sponsor and its denomination from Official Sponsor to Official Betting Partner of the Club, allowing it to show its logo on the front of the team’s shirt.

The new official shirts, now with the Codere brand, were presented yesterday during the friendly match between Rayados and Guadalajara, a preamble to the next Liga MX season, which will begin on July 23.

As such, the Rayados players wore the company logo on the home kit (with the striped shirt), during the first half, and on the away kit (in white and blue), during the second half of the match. Soon, the brand will occupy a prominent place in the club’s stadium, in the Codere “Suite” and other highly visible areas of the venue.

The company has also launched an important advertising campaign that will be broadcast on television, radio and digital media through different social networks, both from the club and from Codere, designed to connect with both the followers of the team and its sports betting customers.

During the coming months, different joint marketing actions will be implemented in order to foster the experience of the club’s fans and Codere sports betting customers, with access to the stadium, invitations to matches and VIP plans, among other activities resulting from this perfect match between gaming and exclusive football-related experiences.

Alberto Telias, Chief Marketing Officer of Codere Online, said: “We are convinced that this long-term alliance between both companies will allow us to grow together and achieve important goals. We could not have found a better travel companion in our expansion journey in Mexico than the Rayados de Monterrey Football Club.”

Meanwhile, Pedro Esquivel, Executive Vice-President of Rayados, welcomed having Codere as the Club’s Official Betting Partner, calling it “a new stage that will undoubtedly boost the team, its supporters and football and sports fans.” He also added that “the presentation of the new jersey kicks off a stage of optimism and enthusiasm to face the next season of the Mexican League.”

Since its arrival in Mexico in 1998, Codere has maintained a leadership position in the regulated entertainment gaming offering in the country. The sponsorship with Rayados, boosts the company’s growth objective in Latin America.

Carlos Sabanza, Codere’s Sponsorship Manager, highlights the importance of this sponsorship in the evolution of the group after an extraordinary year marked by the strong impact of the pandemic on the entertainment sector, especially on the gaming industry with the closing of gaming halls and the postponement of sports competitions. Consequently, he points out, “Our deal with one of the main Liga MX clubs on top of maintaining our agreement with Real Madrid CF, as Official Betting Partner, since 2016, allows us to continue expanding our international brand and achieving our ambition to be the leading company in the Spanish-speaking sports betting and gaming market.”

Codere and Monterrey Rayados Football Club will share the winning entertainment combination, the best gaming and the best football, with their sports fans and sports betting customers in Mexico for the next four seasons.