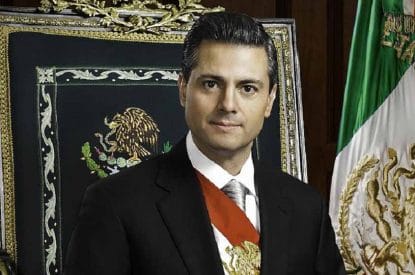 Outgoing Mexican President Peña Nieto awarded a number of casino licences in his last week as president according to local new reports.

Enrique Peña Nieto left office on December 1 and has been succeeded by Andrés Manuel López Obrador. However, according to local press one of his last acts as President was to award gambling licences to operators in The State of Mexico and the state of Chihuahua. Amongst those who obtained permission from the Ministry of the Interior was the legal director of Multimedios Televisión a network of Spanish language television stations primarily concentrated in north-eastern Mexico.

The Ministry of the Interior (SEGOB), which is responsible for oversight over the industry, awarded a license, in the last week of Nieto’s administration, to “Discos y Productions Premier”, the legal representative of which is Roberto Elías Hernández, the legal director of Multimedios Televisión. According to an investigation carried out by La Reforma newspaper, the licence was granted on November 27, three days before the change of government.

The license for the gambling establishment is valid for 25 years in Tlalnepantla, a city and a municipality of the state of Mexico. Alfonso Navarrete Prida was serving as the Secretary of the Interior in 2018 when the licence was granted.
The other licence was approved under the watch of Eduardo Cayetano, then Director of the gambling control board within SEGOB on November 23 to “Superjuegos Robin”. This casino had a one-year permit to operate in Chihuahua State and was granted a licence thanks to a court order.

Two months before the administration of President Enrique Peña Nieto was set to end it was revealed that SEGOB had also granted TV Azteca a 25-year long licence that grants the company permission to operate a land based casino as well as offer online gambling. TV Azteca will be able to operate an online casino and will be allowed to take bets on sporting events, which take place either abroad, or in Mexico as well as on horse and greyhound racing.