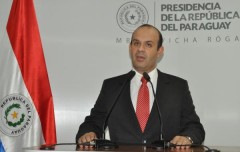 The Legal Department for the Presidency of the Republic of Paraguay, has confirmed that the Executive Branch has submitted to Congress a draft law on “gambling and its regulation.” A new law is, according to the draft, “imperative” and reflects the need for a new set of rules which will lead to stricter control over gaming by the state. It would also give the state the right either by itself or concession via a third party, to operate gambling establishments and underlines the importance of private investment for the promotion of tourism and entertainment.

The new law also emphasises the importance of the emergence of new technologies when it comes to the gambling industry as well as the need for the certification of gaming machines and equipment. In addition it calls for stricter control over the implementation of fees which would rely on a much more accurate knowledge on income generated by the industry. At the same time the new law also proposes a number of player protection measures and a clear government policy when it comes to gambling prevention. In order to achieve this, the new law needs to provide for a much larger gaming control board. This is because the Paraguayan Gaming Commission (CONAJZAR) does not “have its own budget” and lacks personnel according to the new act.

Since 2014 CONAJZAR has been pushing for a bill that would make it an entirely autonomous body. One of the primary purposes of the new bill is to give CONAJZAR its own legal status, its own budget and full autonomy so that it will no longer be part of the Ministry of Finance. In April 2015, CONAJZAR announced that the bill had already obtained the approval of the Executive branch.

Casinos have been permitted in Paraguay since 1997 and under current rules may be located in provinces with more than quarter of a million inhabitants with only one casino being permitted in capital Asunción. In June 2015 CONAJZAR announced plans to discuss the bidding process for a number of casinos in Paraguay and two in the capital. The aim of the new bidding process is to attract large scale foreign investment which would include other amenities such as five star hotels in order to build tourist infrastructure in the region. But while casinos have been permitted now for almost twenty years the casino industry remains underdeveloped with little foreign investment in the industry and illegal gaming has remained rampant.