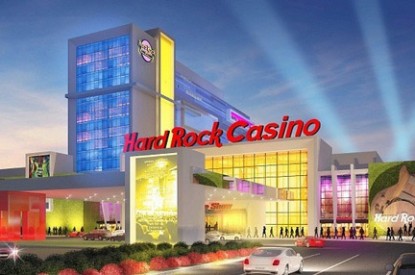 The Alto Paraná regional headquarters of the Paraguayan Chamber of Construction (CAPACO) as well as a number of architect guilds and university faculties have now joined other organisations which are calling for plans for a casino on the Paraguay’s National Ports Authority (ANNP) to be scrapped.

If it goes according to plan the casino will be located in a building belonging to the headquarters of the ANNP at the head of the Friendship Bridge (Puente de la Amistad) – an arch bridge connecting the Brazilian city of Foz do Iguaçu and Ciudad del Este.

However, CAPACO and a number of architects from the Universidad Catolica and The Faculty of Architecture and Urbanism of the Universidad Privada del Este insist that the location of the new casino is a local heritage site as the ANNP marks the spot where Ciudad del Este was initially founded and a such plays a vital role in the city’s urban heritage.

The groups issued a combined press release stating that: “The site of the foundation has a historical character not only for the capital of Alto Paraná, but also for our country” and that the site of the ANNP should “be understood as a public space, with an historical and cultural value.” The group also argues that the site is impractical and would not bring benefits to the area and warns that the new building could lead to overcrowding. “The investment that should mean benefits in the development of the sector would probably end up entailing more problems than solutions,” it said. While the the group is in favour of investment in the city they argue that any building project must be part of a larger “plan of economic and social development of the region so that it benefits the greater number of inhabitants of the metropolitan area of Ciudad del Este.”

In December it was revealed that a group of architecture students had appealed to the Ministry of Culture and had asked that the site be declared a site of Historic Interest. Since then opposition has been growing at a fast pace towards the new project and earlier this month it was announced that members of the ANNP now intend to put the President of Paraguay Horacio Cartes on trial for permitting the use of the institution’s land for the construction of a hotel and casino.

The complaint before the Prosecutor’s Office also encompasses other public officials including local mayor Sandra McLeod de Zacarías as well as other officials for the usurpation of authority. Union members reject Presidential decrees No. 6131 and 6865 as they argue that it violates Ports Law No. 1066, which prohibits via article 16 the use of commercial, financial, or industrial operations which are not in keeping with the port’s main objective.