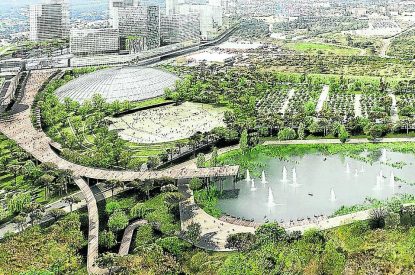 Hard Rock, Melco and Peralada the three companies interested in the leisure and entertainment complex BCN World in Catalonia have deposited a bond of €2.5m each committing to buy land where the hotels, casinos and shopping areas will be built.

Representatives of the three groups met last Friday with the President of Catalonia, Carles Puigdemont , Vice President Oriol Junqueras as well as other members of the government at the offices of the Presidency of the Generalitat de Catalunya in order to seal this part of the agreement, which was required for the project to move forward.

In the agreement the government guarantees the bidding companies the availability of the the land and the right to purchase it once the Urban-Development Master Plan (PDU) has been approved which is scheduled for November. The government has also given the potential operators more time to present their projects having extended the deadline from 30 days to 90 once the PDU is approved.

The Minister for Land and Sustainability, Josep Rull confirmed after the meeting that the deposits made by of each of the operators showed that the commitment “to the project is solid.” The deposit of the winning bid, he said, would be integrated into the development of the project once it goes ahead while the money deposited by the losing bids will be returned.

In June 2015, the Veremonte Group, the investment company that had been leading the initiative to create Europe’s largest holiday resort in Europe announced its decision to withdraw from the project. In order to guarantee the project’s continuation the Catalan Government reached an agreement with La Caixa Bank for the rights to buy the 500 hectares of land allocated for BCN World. The new agreements give the winning bidder the right to enforce the option to buy the land which is currently owned by public company the Catalan Land Institute (Incasòl).

Currently there are four casinos in Catalonia and one or two more large scale casinos will be part of the newly established Tourist and Recreation Complex (CRT) as the project in Vila-seca as Salou is now provisionally known. Both Melco and Hard Rock are competing to operate a casino each while the Peralada Group in partnership with the Genting Group are also competing to be the sole operator and would run a single large scale casino in the resort.