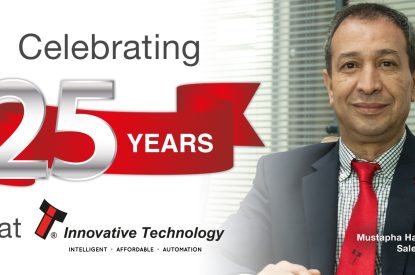 ITL’s Sales Director, Mustapha Hadj-Ahmed, celebrated an impressive 25 years at the company this month. Based at the company’s Spanish office in Barcelona, Mustapha has been an integral part of ITL’s success and expansion across Europe and South America.

Commenting on his 25-year milestone, Mr Hadj-Ahmed said: “I joined ITL in 1996 and created the Spanish office in Barcelona. At the time Innovative only had a UK office and were looking to expand their cash handling offering into Europe. It’s been a great privilege to lead the Spanish arm of ITL, setting up the office and building a great team to support our customers. One of my proudest achievements comes from our Spanish gaming customers, where we took a huge chunk of the market with our products in the early days, and we have maintained this market share for the past two decades.”

“More recently we switched our attention to new markets and developed products for the retail industry. This opportunity has allowed us to take on a new business development manager to work with retail customer across South America, an area I am still very much involved with and keen to continue to grow. Throughout the years I’ve travelled the world for work, including Brazil, Latin America, Europe and USA. I really enjoy meeting our customers and learning about their cultures. This is an exciting time for ITL, and I look forward to being part of the family for many more years to come.”

ITL Chairman, David Bellis MBE, concluded: “I would like to congratulate Mustapha and thank him for the outstanding level of commitment and service he has given to the organisation. As well as being a key part of our international growth and establishing the Spanish office, under Mustapha’s guidance we have increased sales and our market share significantly. Based on his impressive sales record, Mustapha was invited to join the Board of Directors in 2001 where he remains an influential part of our Board to this day.