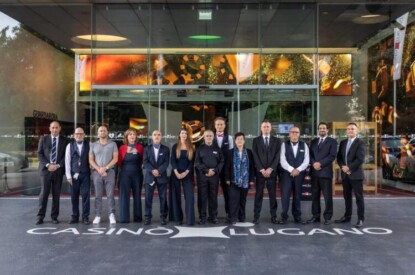 At the end of November, Casino Lugano celebrated 20 years of gaming, entertainment, hospitality, catering and continuous growth in Ticino.

Paolo Sanvido, CEO of the casino, said: “For more than 20 years our casino has shared with the city a long journey characterised by strong emotions and successes, always discovering novelties. Since 2002 we have been committed to continuously innovating the winning formula and enriching the range of experiences for all our customers, providing advanced and complete solutions, as well as always guaranteeing the highest quality.”

Emanuele Stauffer, Chairman of the Board of Directors, added: “We want to continue on this path of growth and improvement in the future, to identify and satisfy new and higher customer expectations, with the same innate commitment that has always pervaded the spirit of Casino Lugano. For this reason, we want to celebrate this success, expressing the esteem and affection we have towards our customers and partners who have contributed to making this venture possible.”

Michele Foletti, Mayor of Lugano, added: “The bond that unites Lugano and its casino is great and is destined to be further strengthened on the basis of our many shared visions. Just like the city, our casino is always ready for new challenges and oriented towards constant renewal. It has been able to recover after the complicated period of the pandemic, investing and developing new projects (not least the online gaming platform swiss4win.ch). Its traditional tourist attraction and commitment to the territory are also undeniable. Lugano would not be the same without its casino.”

The first gaming room in Lugano dates back to 1804, the games were: “biribisso”, “bassetta” and craps.

In 1885 the Lugano Theatre was founded, a building used for music and theatrical performances, dance parties and shows. In 1912 it obtained the licence for small games and in 1922 the name was changed to Casino Kursaal. In 1970 the Municipality became the largest shareholder; 22 years later slot machines were introduced in addition to the traditional boule.

In 1993 ‘big games’ were introduced in Switzerland and the gaming house obtained the type “A” license until, on 29th November 2002, Casinò Lugano SA opened its doors. The current shareholding of the Casinò Lugano is: 67 per cent by the Municipality, 29 per cent by Casinos Austria Swiss and the rest by some small private shareholders. 2014 saw the first restyling and 2018, after the closure of the nearby Casinò Campione, saw the second and the final stages of this extraordinary history dating back 200 years.

Since 2020 Casinò Lugano has expanded its gaming offer, improved its building to become even more comfortable and from March 2021 went officially online with its game platform swiss4win.ch.