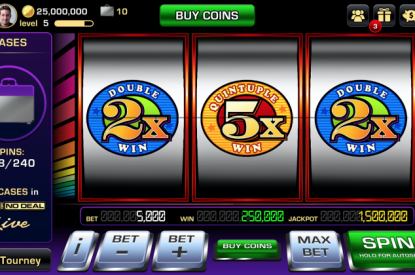 Having released Deal or No Deal Live app at the end of last year, Endemol Shine Gaming and iPro have now launcheda backstage Green Room so players can play social games while they wait for the next episode to air.

Players get chips for their play along episode and season scores to play social games in the DOND Green Room.

The free to play app can be played alongside the TV show and is available to download for free via the App Store and Google Play. By playing in the DOND Green Room, users can win virtual money and a secondary currency which is in the form of DOND cases. These DOND cases will be used to create an advantage in the play along game as well as in prize drawings such as in the current drawing for an official DOND case signed by US host Howie Mandel.

Anil Mistry, Director of Games & Gambling, Endemol Shine Group said: “This addition of Social Games to the already successful Live app gives fans and gamers a greater depth of content and a chance to enjoy a range of new games, as part of the Deal or No deal experience.”

“Nothing makes me happier than to see viewers enjoying themselves playing along with the DOND show and entering the Green Room for some pre and post show fun. The number of registered users of the DOND Live app now makes up a good portion of the viewing audience – which is a win for viewers, CNBC, Endemol and iPro,” said Robert Melendres, founder and CEO of iPro.

In December last year, brand new episodes of Deal or No Deal launched on CNBC in the U.S. after a 10-year hiatus. Fronted by original US host Howie Mandel, the new series returned with 30 one-hour episodes featuring all the high energy and risk-reward that captivated audiences, with some exciting new twists. Deal or No Deal airs Wednesdays at 9PM ET/PT on CNBC.

Globally, Deal or No Deal has been commissioned in 83 territories worldwide with 324 productions internationally.