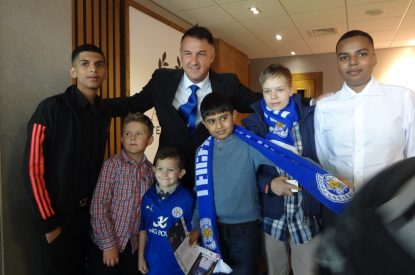 The dreams of six young cancer patients from Leicester came true this week as part of a new partnership between Caesars Entertainment UK and The Wells Sports Foundation’s Box 4 Kids initiative.

The six life-long Leicester City football fans each received VIP treatment at Saturday’s Leicester vs Burnley match, as they watched from the comfort of a hospitality box, donated by Caesars Entertainment UK.

Each child has been diagnosed with a form of cancer, such as Hodgkin Lymphoma and Neuroblastoma, and are currently undergoing treatment for this at Leicester Royal Infirmary.

Roy Ramm, Governance and Public Affairs Director at Caesars Entertainment said: “We take our corporate social responsibility extremely seriously and it’s a real privilege to be able to provide such a unique opportunity to these brave young children, each of whom has such a worthy and admirable story.”

This was the first in a long stream of corporate box donations from Caesars Entertainment UK to Box 4 Kids: a dedicated ongoing initiative that provides seriously ill children a bespoke VIP corporate box experience at major sporting and entertainment events.

Mr. Ramm continued: “We have five corporate boxes at Premiership grounds across the UK, and look forward to Box 4 Kids putting each and every one of them to good use in making poorly children’s dreams come true”.

This was the first time at the ground for all six children, who are all between seven and eighteen years of age. Each child attended with one guest, in most cases a parent.

Anne Shaw from Leicester Royal Infirmary added: “It has been my very great pleasure since 2012 to work with Box 4 Kids. This opportunity has given our children and young people precious memories and something special to look forward to during their cancer treatment.”

Box 4 Kids was created in 2010 and is entirely funded by sporting philanthropist Barrie Wells. Through Barrie’s personal campaign, the scheme has now been rolled out to many other sporting and entertainment venues, including Premier League Football, Rugby League, Rugby Union, Club Wembley, the O2, The Royal Albert Hall, Silverstone Grand Prix, Wimbledon and Lord’s Cricket Ground.

Barrie Wells added: “We are delighted that Caesars Entertainment has been able to donate a box at Leicester City to the Box 4 Kids initiative on October 4. The Wells Sports Foundation’s Box 4 Kids is entirely dependent on the generosity of such donations to enable seriously ill children and a guest to enjoy a wonderful VIP day out at sporting and entertainment events. We look forward to developing further opportunities with Caesars Entertainment in the future.”

Caesars Entertainment UK has won a prestigious ‘Payroll Giving Bronze Award’ for the long-term charitable donations made by staff, raising in excess of £4,400.

The award congratulates the company’s achievements in recruiting 2.5 per cent of its employees to take part in the ‘Payroll Giving’ scheme, where monthly tax-free donations are made to charity.

The participating staff select charities that matter to them personally, a number of which are based in the communities in which the company operates.

Ian Woodward – -HR Director at Caesars Entertainment UK said: “We are very proud of our staff for making these long term charitable commitments and it’s incredibly rewarding to be making a difference both nationwide and in the heart of our local communities. We proactively encourage and empower our staff to embrace our corporate social responsibility, and we’re delighted to see this approach being both realized and recognised.”

Caesars Entertainment UK plans to use this accolade to further promote Payroll Giving amongst staff and generate even more support and donations in the coming months.

Mr. Woodward added: “Our ambition is to double staff participation to achieve a Silver Award next year”.
Payroll Giving is one of the most tax-effective methods of giving to charity. Also known as Give As You Earn or Workplace Giving, it is a valuable, long term and regular source of revenue for charities. Donations are deducted before tax so each £1.00 you give will only cost you 80p, and if you’re a higher rate tax payer it will only cost you 60p.