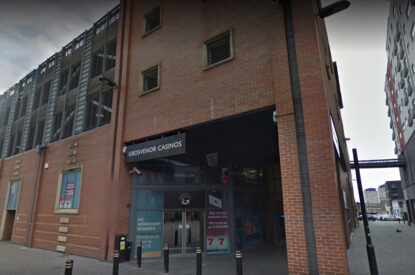 A 51-year-old property developer ended 2021 on a high after winning £114,000 on a national poker game at Grosvenor Casino Sunderland.

Dad of one, Mickey Wharton from Sunderland, was celebrating his late father’s birthday with his mum when he received a call from his son inviting him to the local poker room at Grosvenor Casino Sunderland on Lambton Street.

After some words of encouragement from his mum that his late father may give him some luck, Mickey played in the National Bad Beat Jackpot – a UK-wide cash poker game. After hitting a four of a kind on the last card only to be beaten by a straight flush, Mickey’s disappointment didn’t last long as the Grosvenor Casino team confirmed he had won the jackpot, and Mickey walked away £114,000 richer.

Speaking about his win, Mr. Wharton said: “I still can’t quite believe it if I am honest. Me and my family were out celebrating my dad’s birthday when I got a call from my son inviting me down to the Grosvenor Casino to take part in a poker tournament. I wasn’t sure but my mum said maybe dad would give me some luck and I am so glad I listened to her.

“I was knocked out of the poker tournament quite quickly so tried my hand at the poker cash games and the rest is history. I’m going to buy a house with the winnings, but first I’m going to celebrate with a family trip to Las Vegas.”

The National Bad Beat Jackpot is a nationwide promotion from Grosvenor Casinos that can be won by players taking part in cash games specifically. Four Aces is the hand that is chosen for the first week and should a player get that hand but be beaten by a better hand the jackpot is hit.

Each week that the jackpot is not hit, an additional £15,000 is added to the prize money and the hand that needs to be beaten decreases in value to four kings, then four queens and so on.

At the point the jackpot was hit, it was a minimum of Four 2’s to be beaten and when Mickey Wharton’s Four 10’s was bested by fellow Sunderland local Adam Smith’s straight flush the historic win was confirmed. Adam took home £57,000, while the rest of the prize money was divided up between all players who were playing in cash games at other Grosvenor Casino venues across the country.

Mark Hunter, General Manager at Grosvenor Casino Sunderland, said: “We are so pleased for Mickey and Adam who rounded out 2021 in the best possible way and won a life changing amount of money. We’re proud that this historic win took place in our casino, and we look forward to more to come!”