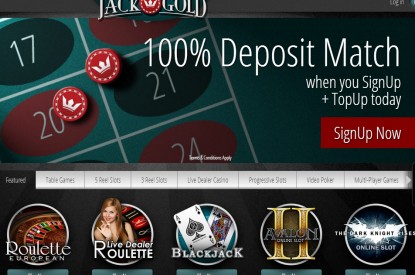 A successful loyalty scheme that saw one lucky customer win a solid gold bar worth £25,000 is to be extended at Jack Gold Casino.

The Gold Rush-themed promotion was designed to reward its regular players and ran alongside the popular site’s first television adverts.

Users collected ‘Gold Dust’ and earned ‘Tickets’ in a multi-level mechanic which handed out greater incentives to those who played the most and got closest to the ultimate prize – a 24 carat bar weighing 1kg.

It proved so popular casino owners Locus Gaming has now unveiled a new programme, titled Gold Dust Rewards, which will transfer Gold Dust earned by players during the previous promotion.

Ed Andrewes, CEO of Locus Gaming said: “We ran a promotion for new customers around the adverts to win a smaller gold bar, but really wanted to reward our loyal members too. It’s great that one of our regulars has won it and we hope the incentives available in the extended Gold Dust Rewards scheme will appeal to those who enjoy our slots, table games, and live dealer.”

The winner of the draw for the 1kg gold bar, who asked not to be named, was a VIP customer who regularly deposited and wagered throughout the six month campaign.

He said: “I’m stunned! I just can’t believe I’ve just won a kilogram of gold! Jack Gold casino has been my favourite place to play the Pirate Radio slot on my iPhone.

“Who knew that I’d strike it so lucky? Thank you Jack Gold! You’ve made my day.”

Jack Gold’s advert first aired on a range of terrestrial and digital channels including ITV, Channel 5, and Sky TV at the end of 2013

Optimised for desktop, iPhone, iPad and a greater number of Android devices,  the site now offers up to 100 free spins on a range of Flash games giving players an opportunity to boost their cash balances.

Its affiliate programme provides partners with unique creative, comprehensive customer service, and tracking and commission calculations via a deal with Income Access.