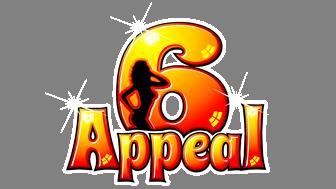 Realistic Games’ recently released five reel slot 6 Appeal is attracting nearly twice as many players as their next most popular game, the supplier has revealed.

Mobile and desktop versions of the game made their debut on Bet365 at the end of April before going live on BetVictor and Ladbrokes in May.

The game has already established itself as a top three revenue generator in their twenty strong slots portfolio, alongside the phenomenally successful Super Graphics Upside Down.

6 Appeal features a top prize of 2000 x total stake, which is awarded when five 6 Appeal symbols line up on any of the 20 win lines.

Realistic Games’ commercial director, Andy Harris, said: “6 Appeal has become one of the best performing slots for our operators in a very short time. Players love the way the dice are used to determine the number of free spins and the multiplier applied to them. It makes for an exciting game and is unlike anything else on the market. It’s a risk trying new ideas and we will continue to take them. We have a lot of experience in playing and making slots, but coupling that with genuine innovation is what is important.”

As well as a host of new slots content, they have also recently released a unique mobile version of pull tabs and Keno.