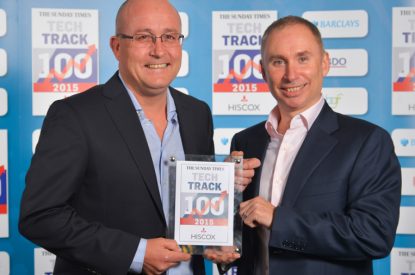 Reflex Gaming has received an award for being one of the UK’s fastest growing privately owned tech companies.

Reflex, which deploys its gaming content onto mobile platforms and boasts one of the country’s most popular social gaming apps, was ranked 45th in the prestigious Tech Track 100.

The dinner and networking event featured contributions from The Sunday Times Business Editor, Dominic O’Connell, Torsten Reil, Co-Founder and CEO of NaturalMotion and Lance Uggla, Founder and CEO of Markit Ltd, the financial information and services company which is valued at $5 billion and considered by many observers as being the next Bloomberg or Thomson Reuters.

Reflecting on the technology award, Quentin Stott said: “We started the business in 2004 and have come a long way in a short time. I believe this award signals a further exciting and dynamic phase in our business development as we enhance what is an already strong position in social gaming and deploy our assets and skill sets into the mobile space.”

Ian Chuter, who has 30-years experience in gaming, including senior positions at William Hill and most recently at Betfair, where he was Group Operations Director, stated: “The progress that has been made by Reflex in just over a decade has been hugely impressive. The company now has a 30% share of the single site market for Category C gaming machines, has been recognised as one of the UK’s fastest growing tech companies and recently moved into a new £1.5m multi–purpose manufacturing and head office facility. This is an extremely exciting time for a business which has an invigorating, independent and entrepreneurial outlook.”

Reflex Gaming specialises in the design and production of market-leading gaming machines to industry clients throughout the UK. Through investment in people and technology, Reflex can take it’s proven land-based games and make them playable via mobile and tablet technologies.