US – Bally to launch Jacko sequel 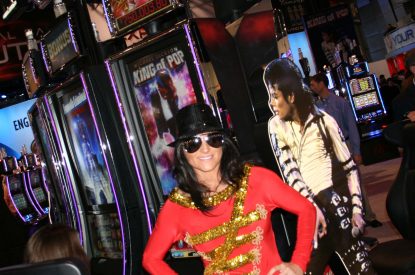 The Wanne Be Startin’ Somethin’ Michael Jackson video slot from Bally Technologies will be available on casino floors in North America this summer.

The game is highlighted by a U-Spin Platinum Record Bonus Spin that prompts players to touch the game screen to spin a platinum record with their fingers for bonus credits or to activate one of three special Free Games bonuses.

“This encore to the hit Michael Jackson King of Pop game is sure to thrill players and fans of the widely beloved artist,” said Bally Technologies’ Vice President of Product Management and Licensing Jean Venneman. “We are excited to deliver a game that features some of Michael Jackson’s most iconic songs, along with unprecedented player interactivity and the chance of a life-changing wide-area progressive top jackpot. Michael Jackson King of Pop is popular around the globe, proving that the music icon is a draw to our world-wide customer base.”