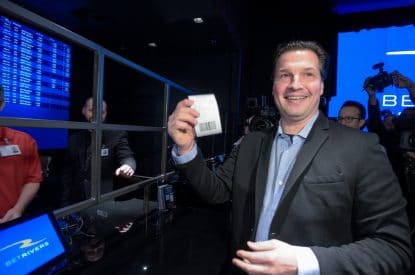 Illinois has joined the ever-growing list of legal sports jurisdictions in the U.S. with the launch of BetRivers Sportsbook at Rivers Casino in Des Plaines, and by doing so took the first step in what could be one of the largest markets in the US.

The BetRivers Sportsbook at Rivers Casino in Des Plaines opened with a 47-foot-wide video wall, five betting windows and 30 sportsbook kiosks in time for the NCAA March Madness tournament, which is one of the most popular times of the year for sports betting.

“I know people who have been driving over the border to Indiana to make sports bets there and we have seen at a casino, the more things you can offer your customers, the better the business,” said Greg Carlin, CEO and co-founder of Rush Street Gaming, Rivers’ parent company.

“I think it’s gonna be a big success,” said State Rep. Bob Rita (28th District), who sponsored the gaming bill in the legislature. “Not only a form of entertainment, but a new revenue stream for the state that’s regulated and done right.”

If the Illinois market fully matures — which would have to include the widespread launch of online sports betting — the state could generate from $9 billion to $11 billion in wagers annually and $650 million in operator gross revenue, according to projections from PlayIllinois.com, which tracks regulated online and retail gaming in the state.

“Illinois’ potential is enormous, but it has a long way to go to become a major player relative to the largest markets in the U.S.,” said Dustin Gouker, lead analyst at PlayIllinois.com. “Launching the industry is obviously a momentous first step. But because of regulatory roadblocks to online sports betting, it will be years before Illinois can enjoy the same kind of boom that we’ve seen in New Jersey, Pennsylvania, and Indiana.”

On Monday, Illinois became the 15th state to allow legal sports betting. Of those, only New York and Pennsylvania have a larger population from which to draw. And Illinois’ retail sportsbook market is expected to ramp up quickly, with five more expected to open soon, including sportsbooks at Argosy Casino Alton, Hollywood Casino Aurora, Hollywood Casino Joliet, Grand Victoria Casino in Elgin, and Par-A-Dice Hotel Casino in East Peoria. Fairmont Park Racetrack in Collinsville, near St. Louis, has also been approved for a temporary operating permit.

Significant hurdles remain, particularly for online sports betting, which isn’t expected to launch until later this year. And when it does it will require in-person registration for mobile accounts.

The Illinois law allows for three “stand-alone” mobile operators such as DraftKings and FanDuel. But because of the state’s in-person registration requirement, those would-be operators will not be able to accept a bet for at least 18 months. And with a hefty $20 million fee to obtain one of those three licenses, it’s not clear which operators will apply.

“Illinois’ high licensing fees for online operators and its in-person registration requirements will undoubtedly stunt the growth of the industry,” Gouker said. “Even with the high fees, the appeal of the Illinois market will eventually be too much to resist for the country’s largest operators. But neighbor Indiana will be able to continue to cash in on the Chicago market until Illinois gets up to speed.”

Online sports betting is by far the most significant revenue driver in major U.S. markets. In New Jersey, 87% of all sports bets in January were made online. By contrast, Rhode Island, which has an in-person registration requirement, draws just 15% of its bets from online sources.

Illinois’ 10 existing casinos, three racetracks, and as many as seven sports venues are eligible to apply to open retail sportsbooks. Those sportsbooks will also be able to set up mobile sports betting apps.

“The Illinois model isn’t ideal, but for Illinois bettors today is unquestionably a good day,” Gouker said. “Most of the state’s residents should be able to place a bet in relatively close proximity. And that is much better than the alternative.”