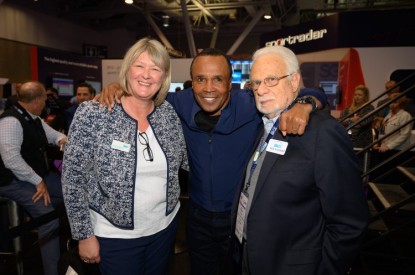 The first edition of ICE North America was held to widespread acclaim last week at the Boston Convention and Exhibition Center, MA, USA.

Reflecting on the success of the first ICE North America, Kate Chambers, Managing Director of event organisers Clarion Gaming, said: “I would like to place on the record my great thanks to everybody who attended ICE North America, to those organisations which supported ICE North America either as an exhibitor or a sponsor, to those who shared their expert insight to what were packed conferences and to the team at Clarion, including our brand ambassador, Roy Student, who helped to deliver an event worthy of the ICE name.”

She continued: “As with all of our events, we subscribe to a process of continuous improvement and, through our Ampersand initiative, we will be working with our stakeholders to consolidate those aspects of ICE North America that went well and, most importantly, to address those where there is room for improvement. ICE North America 2019 represented the biggest and the most influential sports industry gathering in North American gaming and our focus is to build on those successes as we work towards our second edition, which will take place across June 8 to 10, 2020 in Austin, Texas.”

Echoing the positive response, Sam Rattner, founder and partner at LaunchPad winner LineLibrary, described ICE North America as ‘spectacular’, adding that having the opportunity to pitch his global sports betting exchange in front of an audience of thought leaders and C-Level decision-makers had led to ‘dozens of serious VC meetings.’

Josh Faber, Senior Advisor to Spectrum Esports Advisors and Esports Capital, added: “I was able to fly in and fly out of Boston from Washington, DC on the same day and accomplish what I estimate to be six months of C-Suite level networking in one really busy day. In addition to the traditional casino and sports betting vendors, we compared notes with cutting edge online and software companies that will be the “NEXT BIG THING. The whole experience was amazing!”

Nigel Wheatstone, CEO, Full Engagement Sports, said: “We came to ICE North America with a patent, a vision and no expectation. After going through their incubator program, we now have a partnership with an operator and have created essential vendor contacts to monetize our solution. If you need to fast track your knowledge and understanding of the gaming space, I can’t think of anything better than visiting ICE’s next event!”