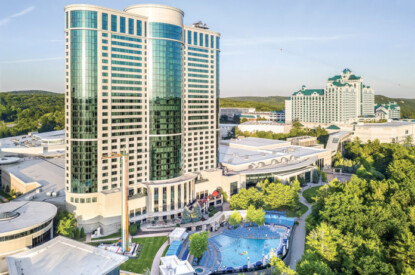 Foxwoods Resort Casino has announced $85m in property development including a new casino, which is slated to open summer 2023. The latest addition to the property will feature a state-of-the-art gaming space as well as a celebrity chef-owned restaurant.

he next-generation casino concept will feature a myriad of premier amenities, including 50,000 sq. ft. of gaming space to include both table games and slot machines, a new luxurious high-limit slot area and a 40-seat bar featuring over 35 slot machines.

“From our modest bingo beginnings in 1986 to the impressive, full sweep of gaming options now available at Foxwoods, we are excited to announce yet another amenity that will entice guests from near and far to visit,” said Jason Guyot, President, and CEO of Foxwoods Resort Casino. “Through our team’s shared commitment of evolving the Foxwoods experience, together, we are continuing to redefine what it means to be a leader in hospitality, gaming and entertainment, and cannot wait to bring this vision to life.”

Foxwoods’ new casino will be situated in the Grand Ballroom, located in the Grand Pequot area of the resort, completely transforming the space into a desirable gaming experience. This addition will create a new and vibrant hub of activity in the center of the resort, which will be open to the main concourse area, and provide unobstructed views into the new gaming space. Construction is slated to begin in November.

As part of its 30th anniversary, Foxwoods has recently announced additional property-wide updates, such as new dining additions, including the upcoming opening of Sushi by Bou with a one-of-a-kind sushi suite, completely redesigned Golden Dragon restaurant slated to open this winter, and fast-casual burger chain Wahlburgers from celebrity brothers Mark, Donnie and Paul Wahlberg, slated to open summer 2023. Recent evolution projects also include the opening of the VIP Canopy Players’ Lounge, the largest lounge Foxwoods has ever operated, as well as CardVault, a first-of-its-kind retail experience for sports memorabilia fans.

As part of its monthly donation initiative in celebration of the resort’s 30th anniversary, Foxwoods Resort Casino continues to support local organizations as a thank you to the Connecticut community that has supported Foxwoods throughout its 30 years.  This month, Foxwoods has partnered with Joshua’s Worldwide Transportation to donate a new score board to the Ledyard Youth Football League, set to be unveiled later this year.

“We are extremely grateful for the support from Foxwoods Resort Casino and their efforts to help our local Connecticut community and youth teams,” said Thomas J. Staigers, President of the Ledyard Youth Football League. “As we continue to grow our league and prepare for future football seasons, we look forward to having a new scoreboard that will bring even more excitement to our young players out on the field, as well as allow multiple generations of players to observer the game. On behalf of the entire Ledyard Youth Football League, we thank Foxwoods and Joshua’s Worldwide Transportation for their continued dedication to give back to our community, helping to unite the youth and past players, building a stronger community together.”