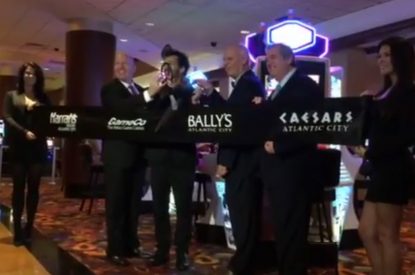 Beginning in November, VGMs will launch at all Caesars Atlantic City properties, with 21 machines operating at Caesars, Harrah’s Resort, and Bally’s Wild Wild West. The premier game, titled Danger Arena is a first-person action video game in which player skill determines the payout. This is the first skill-based video game gambling product ever approved by any regulator in the United States.

“I spent my summers growing up playing video games at the arcade on the Boardwalk in Atlantic City. It’s a unique honour to be bringing the first-ever skill-based video game gambling products to launch in Atlantic City with Caesars Entertainment,” said GameCo co-founder and CEO Blaine Graboyes. “Our goal is to create a VIP experience for gamers and the casino is the perfect destination. We envision a bright, revitalised future in Atlantic City as a new generation of gamers find their way here.”

GameCo and Caesars share a vision to create a destination for the future of casino customers, combining the entertainment, engagement and excitement of video games, esports, and gambling. The VGMs will be set up in high traffic, prominent locations in all three Caesars properties, with three triple-unit carousels at Harrah’s Resort, two at Caesars, and two at Bally’s Wild Wild West.

“Caesars is excited to celebrate the launch of the world’s first skill-based video game gaming machines at Caesars, Harrah’s Resort and Bally’s Atlantic City,” said Kevin Ortzman, President of Caesars and Bally’s, and Rick Mazer, President of Harrah’s Resort, in a joint statement. “The debut of these innovative machines, exclusively at Caesars resorts in Atlantic City, further positions us as a destination of choice for both loyal customers, and the next generation of customers alike.”

GameCo’s proprietary VGM is an arcade-style video game cabinet and controller. Each VGM features a single-player game, generally 45-90 seconds to play, adapted from top console, PC, and mobile developers. The patented VGM gambling platform allows a player’s skill in popular video games to determine the payout and winnings, while maintaining the same casino economics as slot machines. Game genres such as action, adventure, sports, racing, fighting, platformer, and casual games will soon be prominent as casinos adapt to GenX and Millennial gamers who grew up playing video games.
GameCo committed to New Jersey as the first market to launch its VGM, and plans to be in a number of additional gaming jurisdictions within the next six months.