US – Las Vegas casinos become first land-based to use Bitcoin 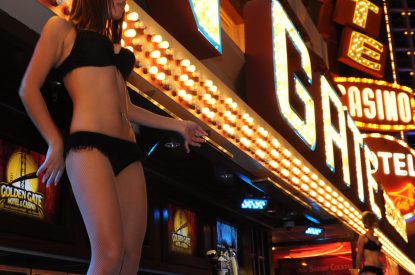 Between the two co-owned properties, Bitcoin will be accepted at five locations, including both hotels’ front desks and in the D’s Gift Shop. Guests at the D will also be able to purchase Detroit’s legendary Coney Dogs at American Coney Island and enjoy fine dining at Joe Vicari’s Andiamo Italian Steakhouse.

Bitcoin purchases at the casino hotels will be processed through BitPay, a service that streamlines transactions using tablet and mobile interfaces. Tablets programmed with BitPay will be installed at each cashier, allowing Bitcoin users to easily pay for services using their mobile wallets.

Although plans to process Bitcoin had been discussed, Derek Stevens, Co-owner and CEO of the D and Golden Gate, who is locally known to socialise with customers at the casino’s Longbar, revealed that several patrons approached him asking if his properties accept the virtual currency. The guest demand provided the impetus to quickly move forward with incorporating the option to pay with Bitcoin at the D and Golden Gate.

“I’m proud that the D and Golden Gate will be the first casino properties to accept Bitcoin,” said Mr. Stevens. “We’re located in the growing high-tech sector of downtown Las Vegas, and like all things downtown, we’re quickly adaptive to new technology. The timing is right for us to launch this initiative, and I’m happy to be able to offer this to our customers.”

Built in 1906, Golden Gate is Las Vegas’ oldest casino. The historic hotel has always been a forerunner in adopting technology – the city’s first telephone was installed in 1907 (the phone number was one). In a unique juxtaposition of the old and new, Golden Gate’s lobby will now house Bitcoin processing technology just steps from an artefact display case containing an authentic model of the 1907 Kellogg telephone.

Mr. Stevens opened the D in 2012, introducing a hotel casino to match the trendy, forward-thinking style of the burgeoning downtown Las Vegas neighbourhood. To create the modern vibe, the existing property located on the Fremont Street Experience received a complete overhaul, incorporating chic design elements, renovating the guest rooms, adding a collection of high-end suites and emphasising entertainment, nightlife and restaurants alongside the casino.

Whilst brand new to the bricks and mortar casino business, Bitcoin has been blazing a trail through the online sector for some time. In January, the value of Bitcoin soared past $1,000 (€743.4) again following Zynga’s agreement to start accepting the virtual currency as a payment option for gamers that buy tokens in its social casinos.

Jon Matonis, Executive Director at Bitcoin Foundation, described it as the ‘ideal digital chip.’ He said it was immediate, irreversible and private making it ideal for online gaming. He also highlighted its two-way convertibility, its independent floating exchange rate, describing it as a non-political unit of account. WinPoker was actually the first major gambling operator to adopt BitCoin but many, many more operators have followed since.

Bitcoin has been embraced as a payment mechanism by a variety of industries, but the iGaming sector is where decentralised, peer-to-peer digital currency is especially convenient. With Bitcoin being independent of banks and payment providers, players are able to cash-out their winnings immediately and with no transactions costs.

Fredrik Johansson, CEO of Cubeia, said supporting Bitcoin as a deposit and withdrawal method was a logical next step. “Cubeia has followed the evolution of Bitcoin closely the last couple of years and we’re convinced it is here to stay. We’re very happy to be able to offer the B2B market an opportunity join this exciting frontier.”

Bitcoin is best described as a peer-to-peer payment system and digital currency first brought in as open source software in 2009 by developer Satoshi Nakamoto. It is known as a cryptocurrency, due to it utilising cryptography to control the generation and movement of money. Users send payments by broadcasting digitally signed messages to the network. Participants known as miners verify and timestamp transactions into a shared public record called the block chain, for which they are rewarded with transaction fees and newly minted bitcoins.