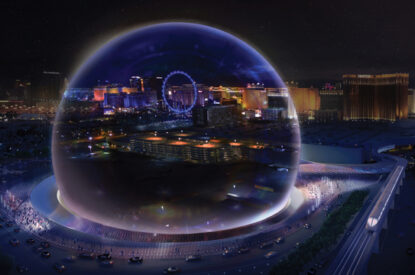 The New York-based Madison Square Garden Company is partnering with Las Vegas Sands to bring a 18,000-seat, futuristic, sphere-shaped facility to the Las Vegas Strip adjacent to the planned arena.

The MSG Sphere Las Vegas will use a 170,000-square-foot LED screen that will wrap around its interior bowl, capable of transforming the outside of the orb-shaped arena into a globe or a tennis ball or project the event happening inside. The plan is to open the facility on New Year’s Eve 2020.

The arena will use an adaptive acoustics system allowing audio and smell to be pumped into the arena meaning customers can smell different scents and feel movements relating to the experience.

Jim Dolan, Executive Chairman and CEO of Madison Square Garden Company, said at the launch of the concept: “What would it take to convince you that instead of sitting in an airplane hangar in Las Vegas, you are sitting in your chair in the polar ice cap or an Amazon rainforest? Obviously if you are in the polar ice cap, you have to feel cold; you have to see the glacier. That is essentially what we are building: an attempt to convince you that you are somewhere else. We are going to employ a haptic flooring system that will create vibrations that when you are riding atop a Harley, you’ll feel the pistons pumping.”