US – New ESPN studio at The LINQ Hotel in Las Vegas 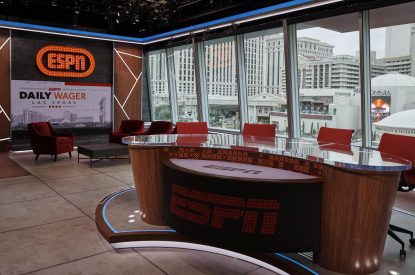 ESPN and Caesars Entertainment have opened a new studio at The LINQ Hotel + Experience in Las Vegas with produced segments for SportsCenter and digital platforms.

With the new studio, ESPN will expand its content with Caesars to bring more robust, Vegas-exclusive sports betting and entertainment news to fans around the world. This includes moving ESPN’s Daily Wager to the new LINQ studio beginning September 8 and launching a sports betting-themed digital show this fall.

“In our ongoing mission to serve sports fans, we are committing to a bigger presence both in Las Vegas and with our content across platforms to authentically serve a fast-growing, highly engaged audience,” said Mike Morrison, VP of Business Development, ESPN. “We are incredibly fortunate to work alongside a great partner like Caesars Entertainment to achieve this and look forward to collaborating on more opportunities in the future.”

“The debut of the all-new ESPN studio at The LINQ Hotel + Experience is a testament both to Las Vegas’ position as the sports betting capitol of the world and its transformation into a sports city,” said Chris Holdren, Caesars Entertainment, Inc. Co-President of Caesars Sports. “With the marquee location of the studio right at the heart of the Strip, we’re excited to see the unique programming that could only be produced here in Las Vegas.”

The new, 6,000 square foot facility includes three studios and features 12 cameras, including two exterior robotic cameras. It will operate using ESPN’s REMI production workflow, with 24 transmit and receive paths to ESPN control rooms and technical operations around the country. The facility is ESPN’s first built to be fully capable to support native 4K, and will launch in 1080p. It will serve as the epicenter of ESPN’s sports betting-themed content for linear, digital and social shows. The studio will also play a vital role during major sporting events, including the growing number of franchises and marquee events in Las Vegas.

“Our new studio with Caesars is ideally located in the middle of The Strip and has been designed and built out with state-of-the-art UHD 4K-capable technology, a first for ESPN,” said Chris Calcinari, SVP of Remote Production Operations, ESPN & ABC Sports. “We will leverage this technology and our innovative REMI production model to serve this growing audience of sports fans with the quality content for which ESPN is known.”

Beginning Sept. 8, ESPN’s sports betting news and information program Daily Wager will permanently move to Las Vegas and originate from the LINQ studio as it returns to ESPN2 at 6 p.m. ET on weekdays after a hiatus due to the pandemic. Daily Wager is hosted by Doug Kezirian, who has covered sports betting for more than 15 years, and is joined on the program by sports betting experts as well as ESPN analysts and reporters. The show celebrated its one-year anniversary in March.

This fall, ESPN will also expand its sports betting-themed content into multiple platforms with the launch of a new digital show. New episodes will be available three days a week on the ESPN app, Facebook, Twitter, and YouTube as part of a new sports betting channel that will include content originating from Caesars.

“The appetite for sports betting content continues to grow among fans,” said Connor Schell, EVP of Content, ESPN. “Our new studio will not only operate as the headquarters for that content, but it will also anchor our year-round presence in Las Vegas – a city that has become a destination for the biggest events in sports. The LINQ studio allows us to meaningfully cover the lineup of major events on the horizon with our league partners like UFC and Top Rank, the NFL regular season with the Las Vegas Raiders – beginning with the Monday Night Football home opener on Sept. 21 – the Las Vegas Bowl, the NHL’s Vegas Golden Knights, NBA Summer League, and the rescheduled NFL Draft in 2022.”