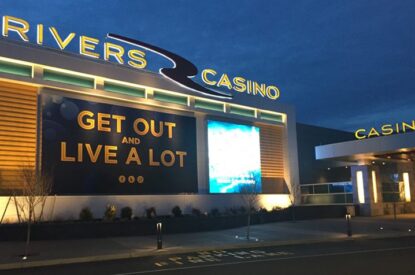 Whilst the four upstate casinos in New York are still waiting to hear when they might be able to offer sports betting, Rivers Casino and Resort remains the top earner, outperforming the bigger Resorts World Catskills, del Lago Resort and Casino and Tioga Downs.

With New Jersey generating $24m in sports betting profits in September, New York’s casinos have had to watch on from the sub’s bench during the NFL football season.

Whilst watching from the sidelines, Rivers in Schenectady has though made twice as much more money per slot machine than Resorts World Catskill in October, according to data casinos provide to the New York state Gaming Commission.
The findings are fairly consistent with Rivers performance throughout 2018. Despite having about 1,000 fewer slot machines than Resorts World, it generated $117.5m in GGR from February to October this year, compared with Resorts World’s $113.6m.

It also outperformed del Lago Resort and Casino in Seneca County, which despite having around 800slots more than Rivers generated just less than the Schenectady property, recording GGR of $115m over the same period.
In terms of win per slot, Rivers currently stands at $236, Tioga Downs is at $188, del Lago is at $166 and Resorts World is bottom with revenues of $102 per slot.

A Rivers spokesperson said: “We are very thankful for the support this year from our loyal guests. We continue to focus on providing a great guest experience every day.”

According to Jeff Gural, owner of the state’s smallest upstate casino, Tioga Downs, ‘the last piece of the puzzle is to get sports betting.’

He said however: “In order for us to do mobile, it would require the Legislature to pass legislation to allow mobile betting.’

This is expected sometime next year and although nothing has been set in stone it is expected to drive more customers to help all four casinos finally meet their estimated earnings.

Resorts World Catskills is already prepped with a deal with bet365 already in place.

Bet365 is buying $50m in shares from Resorts World’s parent company, Empire Resorts in exchange for half of the profits from sports betting during the 20-year contract.

“We think both on site as well as mobile sports betting will be profitable for Resorts World Catskills and will drive business to our casino,” said Manny Pearlman, Executive chairman of Empire Resorts.

Brad Maione, a spokesman for the Gaming Commission, confirmed recently that he could give no timeline on when the commission would pass regulations.