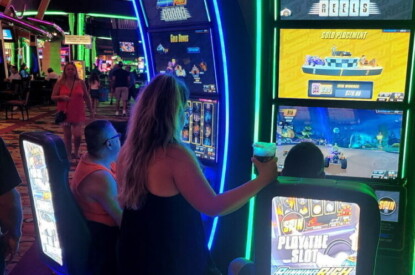 The final step in the approval process will occur at the Commission meeting on December 22. Competition Interactive aims to shake up the world of casino gaming with its social, competitive, and hybrid skill-based games which can now be enjoyed in Las Vegas casinos including New York New York and The STRAT Hotel, Casino & SkyPod.

Positively received by both operators and players for its interactivity, high-end graphics, and innovative gameplay. The hybrid chance/skill game is the world’s first and only slot game with a steering wheel that allows players to use their skill in an arcade-style race to determine bonus payback. This unique arcade-style racing experience will enable players to drive for cash on 6 fairytale-themed courses with a modern twist.

“As a Las Vegas gaming manufacturer, we are thrilled that we brought the casino industry the first-ever gambling racing game. We are closer to merging the world of land-based casino gambling with the world of interactive video games. The time for Next Generation gambling games is now.” says Keith.

“We founded Competition Interactive to create and build new forms of casino entertainment. We’re dedicated to creating a whole new world of competitive and interactive games for the casino.” said Mr. Steelman.