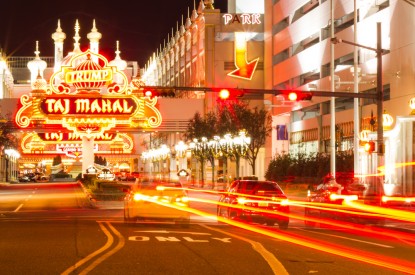 Trump Taj Mahal Casino is to open the first ever strip club within an Atlantic City casino as the operator gambles on a new revenue stream to add to its facility.

Scores, a New York-based strip club operator is to open a satellite establishment inside the Resort next month.

It will spend $25m developing the Scores property, which will open September 12 with five private VIP rooms, 11 stripper poles and an ultra-VIP room for celebrities and high-rollers.

Bob Gans, Managing Partner for Scores Atlantic City, said: “We feel this is the third leg of the Atlantic City triangle: gambling, alcohol and adult entertainment. There are 30m people who come to Atlantic City every year. You have the safety of a hotel casino, and we have the right brand and the know-how to do something that hasn’t been done before. We can be the Pied Piper here.”

However New Jersey legislation states casinos cannot offer total nudity so the acts in Scores will only be unable undress to G-strings and the small fabric breast patches called pasties.. The original Scores in New York City is known for the most beautiful exotic dancers in the world, celebrity sightings and spontaneous excitement. Scores Atlantic City reflects the evolution of the brand from modern day gentlemen’s club into a social and sensory adult entertainment complex that appeals to men and women alike.

Mr. Gans added: “We appreciate that the Trump Taj Mahal had the vision and business savvy to feature Scores Atlantic City as a premiere nightlife attraction that appeals to everyone. It is certain to become a distinct competitive advantage in the Atlantic City marketplace.”

When not onstage, impeccably dressed Scores entertainers interact with guests on a social basis throughout the club. Gourmet bar-bites will be available at Scores. Additionally, Scores Atlantic City is proud to have Robert’s Steakhouse of New York, a four star fine dining steakhouse in the family. Robert’s is located on the first floor of the Taj Mahal and will offer group dinner and entertainment packages, and a variety of catering options to clientele at Scores.