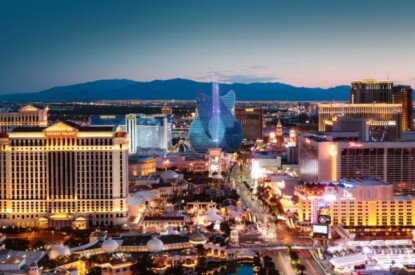 In November, US commercial gaming revenue grew by 2.4 per cent year-over-year, the 21st successive month of comparative growth. According to revenue data reported by state regulators and compiled by the AGA, nationwide gaming industry win from traditional casino games, sports betting and iGaming reached $5.02bn in November.

Trailing 12-month (TTM) revenue was $59.58bn for the period covering December 2021 through November 2022. Sequentially, TTM revenue inched up 0.2 percent compared to the preceding TTM period stretching from November 2021 to October 2022. The near-flat TTM trend is unsurprising considering the commercial gaming industry has been back to operating at full capacity without pandemic restrictions for more than a year.

At the state level, 21 of 33 commercial gaming jurisdictions that were operational one year ago and had reported at the time of writing posted year-over-year revenue growth in November.

Notable among the declines was Nevada where monthly gaming revenue dipped 7.6 percent from last November, driving the slowdown in nationwide revenue overall. Nevada revenue decreased even as Las Vegas visitation increased 4.9 percent year-over-year, supported by a variety of events and a 45.4 percent jump in convention attendance, according to the Las Vegas Convention and Visitors Authority.

Through the first eleven months of 2022, nearly all commercial gaming states were tracking ahead of the same period in 2021, the exception being the D.C. sports betting market (-14.7 per cent), Mississippi (-3.7 per cent) and South Dakota (-1 per cent). Increasingly difficult year-over-year comparisons were felt heavily in Mississippi and South Dakota which had previously benefited from the relaxation of operating restrictions earlier than most other states.

The decrease in table win was primarily driven by a contraction in Nevada table gaming activity, especially on the Las Vegas Strip where the amount wagered on table games dropped 21.2 per cent year-over-year and table win contracted 23.6 per cent. Statewide, revenue generated from the most popular table games in Nevada, Blackjack and Baccarat, declined 23.1 per cent and 37.7 per cent respectively, while drop volumes for these games decreased 18.0 per cent and 31.3 per cent.

Through November, US casino slot machines and table games have generated revenue of $43.79bn, tracking 6.7 per cent ahead of the same eleven-month period of 2021.

With sportsbook hold dropping to 7.9 per cent from 9.8 per cent one year earlier, betting revenue only increased 2.6 percent to $743.8m. Figures exclude Arizona data, which had not reported November numbers at the time of publication. Year-to-date commercial sports betting revenue reached $6.56bn, tracking 65.4 per cent ahead of the same period last year with Americans having wagered $83.13bn through the end of November.

Meanwhile, iGaming operations in Connecticut, Delaware, Michigan, New Jersey, Pennsylvania and West Virginia reported revenue record of $458.4m, up 33.0 per cent on the same month in 2021. Year-to-date iGaming revenue stands at $4.54bn, tracking 36.3 per cent ahead of the same period in 2021.

Taken together, revenue from iGaming and sports betting accounted for 23.9 per cent of combined commercial gaming revenue in November, down from 24.5 per cent in October, while it sits at 20.2 percent for the year.

At the state level, commercial gaming revenue dispersion across verticals varies considerably. In the four states where all three verticals are legally available (including online sports betting) – Michigan, New Jersey, Pennsylvania, West Virginia – the combined share of sports betting and iGaming range between 20.7 percent in West Virginia to 61 per cent in Michigan. Note that Michigan’s share does not account for land-based gaming revenue from the state’s 23 tribal casinos.