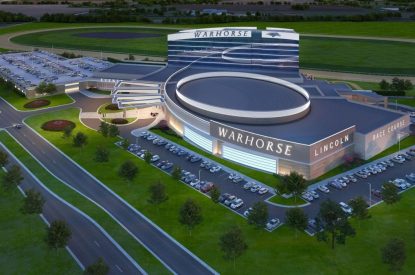 The animation is a conceptual glimpse of the exterior and interior of the casino and race course facilities after a proposed $200m investment into the complex to expand casino gaming. The casino and accompanying resort will bring roughly 925 jobs to the city.

In addition to Lincoln Race Course, WarHorse Gaming, recently released a similar style video for the casino concept at the current Horsemen’s Park in Omaha. Similar plans are underway for a horse racing track and casino in South Sioux City.

WarHorse Gaming will be responsible for casino management and gaming operations at the Lincoln Race Course, Horsemen’s Park in Omaha, and Atokad in South Sioux City.

Both WarHorse Gaming and the Nebraska Horsemen’s Benevolent and Protective Association are at the beginning planning stages to expand casino operations at the horse racing tracks. The three casinos will all be branded under the WarHorse moniker. Expanded gaming in some form is expected as early as late 2021, with full casino operations up and running during 2022.

“Although we’re still early in the process, it’s exciting to see the potential of a world-class gaming operation for the city of Lincoln and the state of Nebraska,” said Lance Morgan, President and CEO of Ho-Chunk, parent company of WarHorse Gaming. “Our goal is to build a top-notch facility that compliments horse racing while at the same time offering a resort style casino/hotel on the property.”