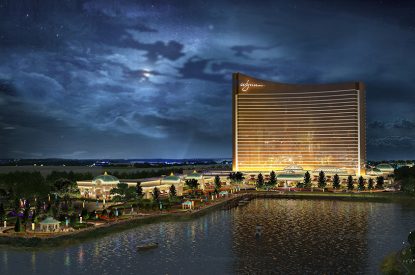 She believes that Wynn’s permit application should be rejected until a blue print is presented to prevent traffic congestion around Boston’s Sullivan Square area located close to the site of the proposed casino site.

In a letter to Matthew Beaton, secretary Executive Office of Energy and Environmental Affairs, she said:

“We urge you not to issue a Massachusetts Environmental Policy Act (MEPA) certificate for the Casino until Wynn’s certificate includes a long-term traffic solution for Rutherford Avenue and Sullivan Square that takes into account years of planning by community stakeholders and is compatible with the City of Boston’s redevelopment plans for that area. If you approve the Casino without a long-term traffic mitigation plan, we may never get one. This dangerous and congested set of roadways may be unfamiliar to many state residents, but it serves as a major regional transit hub and access point.
“Until the identified flaws are corrected, neither the public nor the relevant decision makers should rely on Wynn’s analysis and conclusions,” she added. “These flaws have a particularly significant impact on Sullivan Square and Rutherford Avenue, which were selected by the City of Boston in 2013 for downsizing, but which Wynn now envisions will serve as the primary corridor for traffic entering and exiting the Casino.

“We expect the fair treatment afforded any other developer,” he said. “After two-and-a-half years, and millions of dollars and thousands of pages of traffic analysis, we are ready to move forward with our Wynn-funded $10.9 million Sullivan Square package, which will mitigate the incremental traffic impact of our project.”

Wynn has though suggested paying $7m over 15 years to fund improvements to the subway line crossing close to the casino. The agreement marks the first time in the history of the Commonwealth of Massachusetts that a private developer will subsidise MBTA operations.

Wynn will pay the MBTA $410,188.00 in the first year (2018) with a 2.5 per cent increase per year for 15 years. The funds will subsidize more scheduled train stops at nearby Sullivan Square, Malden Center and Wellington Circle Stations to handle the increased passenger count that Wynn and surrounding developments—including Assembly Row and the Hood Business Park—will generate. Money from Wynn will also be used to promote the use of late-night service on the Orange Line.

“The payments from Wynn to the MBTA will have a far-reaching effect beyond the Wynn Resort in Everett,” said Robert DeSalvio, President of Wynn Everett. “Shoppers and diners from Assembly Row and Malden will benefit from the increased service we’re funding, as will riders going to and from downtown Boston and the Back Bay. Every stop on the Orange Line—including Chinatown, TD Garden and Faneuil Hall—will realize reduced wait times day and night from the capacity Wynn is subsidising. The more trains we add the more people will use public transportation for work and play, all while lowering the number of cars on the street.”

Wynn is spending $76m on local traffic improvements and will be heavily promoting the use of alternative travel modes to and from the Wynn Resort in Everett. Along with shuttle buses to surrounding transportation centers and off-site parking for employees, Wynn is also funding a year-round water transportation system that will connect passengers to Boston Harbor.

Wynn Everett has won the licence to build a $1.7bn five-star resort with more than 600 hotel rooms, high-end spa, retail, dining, ballroom and meeting space. Situated on 33 acres along the Mystic River, the site will allow for public enjoyment of the waterfront with paths that provide access to the harbor and retail and dining experiences that overlook the river walk. The resort will generate more than 4,000 construction jobs, more than 4,000 permanent jobs with excellent salaries and benefits and approximately $260m in annual tax revenue to the state.

Wynn owner Steve Wynn said during a company conference call in July that he hoped to be ‘treated with a little softer hand’ in Massachusetts, highlighting that Wynn Resorts was tabling the largest single private investment in the state’s history.

Alongside Wynn’s plan for Massachusetts, MGM is building a resort in Springfield and Penn National Gaming is already operating Plainridge Park in Plainville.