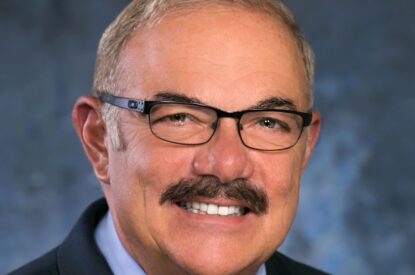 The strictly regulated gaming industry can provide a path forward as a partner in the critical work of addressing the substance abuse epidemic. From 1977 until 2020, the New Jersey Casino Control Commission was statutorily precluded from granting a casino key employee licence to anyone convicted of certain disqualified offences under the Casino Control Act.

Bringing a lifelong career in law enforcement, NJ Casino Control Commission Chairman James Plousis has a progressive understanding of how to ensure non-violent former offenders who have changed their lives for the better can maintain that change.

His vision and desire to ensure that the Commission remain a key partner and catalyst in promoting the general welfare, health and prosperity of Atlantic City, the Greater Atlantic City region, and the State of New Jersey as a whole is a primary mission of the Commission.

For over 45 years, the Commission has been the gold standard for regulation, not just in New Jersey, but around the world. And now, in one of the most tightly regulated jurisdictions, New Jersey is able to give deserving people a second chance. Good people make mistakes. In the end, many of these people can end up being excellent employees.

G3 interviewed Chairman Plousis ahead of his keynote speech at the IAGA Summit in Boston.

Chairman Plousis, what’s the message you’re seeking to convey to the audience at the IAGA Summit in Boston?

The bigger message is that the gaming industry is the most regulated industry in the world and if we can take a shot on people that have been involved with the criminal justice system, then any other industry should be able to do it as well.

Is this a newly announced initiative or has it been implemented already?

Back in 2019 we started working with local state senator, Chris Brown, who had been contacted by casino executives in regards to changing the law that meant that if you were involved with the criminal justice system in the US, you could not get a key licence.

A key licence is the higher of two levels of licensing in New Jersey, the registration licence for regular employees and the key licence if you are in a supervisory position. You need a key licence to move up in the management structure of a casino.

Working with Senator Brown and Governor Phil Murphy we passed a law that meant if you successfully complete Recovery Court, which is a very intense procedure, you are eligible to obtain a key licence. It was a big step forward, as since 2020, when Governor Murphy signed the legislation, applicants can apply for a key licence even though they had a drug offence.

Since the law was passed, how many have passed through the programme to employment?

Well, ironically with Covid-19, everything was side-tracked as everywhere was closed for six months and so we are just getting back on track now. We have captured some numbers, but with closures and Covid the numbers at this stage mean nothing.

Who initiated this project?

My background is that I’ve been in law enforcement my entire career. Prior to being chairman of the Casino Control Commission, I was chairman of the State Parole Board. When starting my current role I met with all the casino executives and asked if they’d have an open mind on hiring people that have been in the criminal justice system and have paid their dues to society?

I laid that groundwork with the casino executive and then Senator Chris Brown took up the baton as did Governor Phil Murphy as they were very interested in giving people a second chance.

What was the feedback you received?

I have to give the regulatory agencies a lot of credit as they were open-minded and a number were very vocal supporters, as were many of the casino executives. Joe Jingoli of Hard Rock in Atlantic City was very active, he jumped onboard straight away and was one of the people that spearheaded this initiative.

How much is the project concerned with community outreach as it is the staffing shortage in US casinos?

It’s two-fold in that casinos both in the United States and around the world are located in urban areas in which there are high concentrations of people involved in the criminal justice system. So this helps the local residents enter and prosper within the gaming industry, which is key.

You can now start at the bottom and work your way up if you have the talent. And the other dynamic, as you mention, is the labour shortage, which has meant that the timing of this initiative has been very critical.

All of the nine casinos in New Jersey, as of early May 2022, have a combined 2,500 open positions. At a job fair in April, the figures showed there were 1,300 full-time positions and rest were seasonal and part-time.

On April 28, we held a Veteran and Re-entry Job Fair, were we invited people from Recovery Court as well as the half-way houses in the area to apply for jobs. In total we had 73 people attend the fair.

Is the licensing scrutiny the same? Is the process longer, shorter or the same?

It is the same process for people involved in the criminal justice system, but during the background investigation we will verify that they have successfully completed Drug or Recovery Court, which makes them eligible. If they were behind bars in an institution and completed as Recovery Court there as well.

Are there any qualms about public scrutiny if there should be any infractions involving people from this programme in the future?

I believe it will survive that scrutiny. There will always be a bad actor out there, but I think the vast majority will thrive in the gaming business. And there are some protections, bonding that can assist, and tax benefits for hiring someone from the criminal justice system. There are many pluses for the industry for taking this risk.

In terms of taking a risk – how big or small is it for an operator?

In my experience coming from the Parole Board, some of these men and women end up being the employers best employees. Some of them just want that second chance and see this as a great opportunity, especially in an industry in which they can progress through the ranks if they work hard.

In most cases they appreciate the opportunity. Again, there will be some that won’t and they will end up being terminated from their position, but the vast majority will succeed.

Do you see this as becoming a role-model for other jurisdictions, both in the US and internationally?

Yes. For 44 years New Jersey has been the gold standard in gaming around the world. We have had visitors from Aruba, Japan, Virginia, Pennsylvania and many other states and nations looking to emulate our standards.

I think that people in the industry know our reputation and understand that if New Jersey can give this opportunity to people in the criminal justice system, I think other states could follow and other countries.

The law singles out drug abuse in regards to the licensing programme, what’s the scale of the issue that you’re seeking to highlight and to some degree address?

In America last year we had over 100,000 overdose deaths. It is still an epidemic. To give you some context, we have over two million people in custody in the Unites States, with 70 per cent of those incarcerated due to substance abuse.

That’s the positive message we are sending and I think everyone in the industry recognises that substance abuse is a national issue, but not it is coming into the sunlight.

What is Recovery Court for our readers outside of the US and what’s involved in the process of qualifying from the system?

We’ve had Drug Court for around 15 years in New Jersey, which has evolved into Recovery Court. You apply to enter the programme which can shorten your sentence or even divert your sentence from being a custodial one.

There are weekly meeting and you must attend substance abuse classes, in which there are monitors. It can take up to five years to graduate from Recovery Court. Many people fail the programme, but the majority complete it. It is highly intense, but the success rate is also very high.

Do you have an estimate of the kind of numbers you’re expecting to apply and take up the offer to join the gaming industry as a result of the law?

We have one casino here that is talking directly to the Department of Corrections to conduct training with people in custody with people so that when they are released they can immediately apply for a job in the industry.

There is no question that the layout shortage is opening doors that would have been closed in the past. Part of this is an education programme too, as people historically have been aware that

“In America last year we had over 100,000 overdose deaths. It is still an epidemic. To give you some context, we have over two million people in custody in the Unites States, with 70 per cent of those incarcerated due to substance abuse.

“The vast majority due to drugs, some poly-addicted drugs, some alcohol, but the vast majority are drug related. I think the positive is that we are recognising the problem. It is not a stigma to go through Recovery Court and succeed. That’s the positive message we are sending and I think everyone in the industry recognises that substance abuse is a nation issue, but not it is coming into the sunlight.”

if you had a past in the criminal justice system that automatically ruled you out of a role in the gaming industry. We are trying to break down that barrier and get that message out.

Does the programme have to prove itself successful over a prolonged period of time before it’s adopted outside of New Jersey, or is this an idea that’s already fully-baked?

At the IAGA Summit I intend to give the delegates direct examples of cases in New Jersey to give people solid facts. I think the industry is prepared to take the risk on someone who might appreciate the job more as it’s a second chance.

One of the examples is a follows:

General Manager, Harrahs Resort Atlantic City: “Chairman Plousis, we have two individuals, one who works in audio-visual and the second works in security. Both individuals are hard workers and quickly have become valuable members of our team. I am confident that one is about to be promoted as he is doing so well. I also know that we are hiring individuals with past offences all the time.

“We do not advertise this fact as we consider it a confidential matter. These applicants always seem to be more eager and willing to work than some other candidates that have had no priors. We generally believe in second chances. Both for current team members as well as our applicants.”