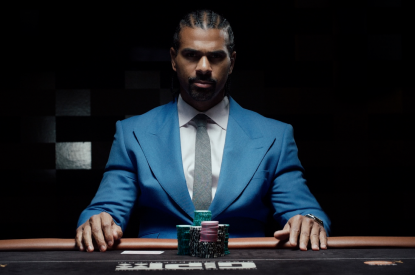 David versus Goliath charts Haye’s progress from total novice to competing in one of the world’s biggest poker tournament, Grosvenor Casinos’ Goliath 2019 in Coventry. The feature-length documentary is available to watch and download on Amazon Prime.

A new ﬂy-on-the-wall documentary, featuring one of the United Kingdom’s most iconic boxing heavyweight champions taking on the world of poker, premiered on Amazon Prime on Friday 17th April.

David versus Goliath is a true underdog story charting the ups and downs of former Uniﬁed World Cruiserweight and WBA World Heavyweight Boxing Champion, David Haye, and his journey to learn the skill and strategy of poker to compete in the world’s biggest live poker tournament outside of Las Vegas, Grosvenor Casinos’ Goliath 2019.

Much like the famous fable, Haye’s poker story is one of humble beginnings. After officially retiring from professional boxing in June 2018, he confesses to not knowing whether a joker can be played in the game before taking on the challenge.

But following 12 months of intense training with some of the world’s best players, the documentary follows David as he competes against 9,000 seasoned amateur and professional players to win hearts and minds at the Grosvenor Casinos’ Goliath tournament in Coventry.

Speaking about what viewers can expect from the documentary, David said: “When Grosvenor Casinos issued the challenge to me back in 2018, I had just retired from boxing and was ready to get my teeth into a new challenge.

“I’ll be the ﬁrst to say that I initially underestimated the complexity of the game and size of the challenge I had taken on. I certainly had a harsh awakening in my ﬁrst tournament! However, with time and ﬁnding the right learning environment for me, I fell in love with the game and I’m proud to now be a sponsored poker player for Grosvenor Casinos. This challenge has become just the start of my poker journey and I look forward to getting back to the poker table and playing more in the future.

“It’s been a crazy journey so far, reconnecting with old friends and making new, it’s going to be amazing to watch it all back in the documentary we made. I’m sure I’ll cringe at some of the moves and decisions in the early months, but it’s all part of the journey. I hope people enjoy the story of David versus Goliath as much as I did.

I would like to say again, thank you to everyone who helped me with this epic challenge, it was a real adventure, their patience helped ignite a ﬁre within me and I will be back at Goliath this summer looking to go better than 2019!”

David versus Goliath sees David Haye travel the world from Blackpool to Las Vegas to take part in poker events and unique training opportunities with actors, memory coaches and psychologists to forge his own style and poker personality. David even enlists the help of his old nemesis, Audley Harrison, who becomes his poker mentor in which a bromance quickly unfolds.

One of his biggest successes on his poker journey took place in the Philippines, when against the odds after an intense 48-hour bootcamp with Harrison, Haye entered the Manila stop of the Asia Poker Tour ﬁnishing an incredible 28th out of 500 to cash in, which Haye marked as a similar feeling to winning a world title belt.

As part of this challenge, Haye has also been coached by some of the best poker professionals on the circuit, such as Grosvenor Casinos’ sponsored players, Jeff Kimber, Katie Swift and Joe Beevers, who have won more than US$4m between them.

Russell Tamplin, Head of Poker for Grosvenor Casinos, said: “We were all in awe of what David was able to achieve at last year’s Goliath tournament. To do that well in such a short space of time was extraordinary and we can’t wait to see how he does this year. The challenge now will be to push on and sharpen those skills to take his poker game to another level.”

Speaking about his experience, David Haye answered questions about the documentary.

Looking back over the documentary can you describe what it has been like?

It’s been incredible, the journey was transformative. When I accepted the challenge, I had genuinely never played a hand of poker in my life, I didn’t even know if Jokers were used! There were certainly times I thought I may have bitten off more than I could chew, the complexity of the game and time required to learn the basics, before ﬁnding my own style was far greater than I had ﬁrst anticipated.

I had to ﬁnd my own way of learning, I’ve never been one for classrooms, I have to create an environment I enjoy being in. Once things clicked I found I immersed myself in the game, much like boxing it required signiﬁcant dedication and discipline – of course when lady luck is on your side it always helps!

How does it feel to be a Grosvenor Casinos sponsored player? Considering you were a complete amateur a little over a year ago?

It certainly does feel like a sense of achievement. Having played with the best over the last 12 months I appreciate the time and commitment they have made to the game to get to where they are now. To sit shoulder to shoulder with other sponsored players feels notable, a little like when as a rising sportsman you get your ﬁrst kit sponsor – it’s the nod of the hat from someone ‘in the know’ to say ‘we think you’ve got the ability to go far’.

What were the high points and low points of your journey into poker? Are there any memories that stand out?

Blackpool has to be a low for me, I’m naturally incredibly competitive so to not even last 15 minutes in a two-day tournament was a real wake up call. I got to a point I had to take the reins of my learning – long workshops with a classroom format wouldn’t work for me and I knew it. Audley was a complete game changer, as a fellow former professional athlete our brains work in similar ways.

He understood I needed to learn by doing. Making mistakes and paying the price, much like in sparring. During our bootcamp at the Cauayan Island Resort in the Philippines suddenly everything clicked, going on to cash for the ﬁrst time at the Asia Poker Tour was pivotal. I suddenly felt like I was back in the game taking on Goliath!

Now that the next part of your journey has been revealed how are you going to approach it? Will it be different to how you approached the ﬁrst challenge?

With the global pandemic this year, it’s naturally different, I had been playing at The Vic and hosting regular games at The Undercard, my private bar and lounge. But where I planned also to travel, playing with and against the best in the world, again the current environment doesn’t allow for that. I will be playing online to keep my eye in and as soon as situations allow, I will be entering in live tournaments!

Did the success you had in the ring help you in any way to compete in the Goliath Poker Tournament?

Without a doubt my success in the ring helped when taking on this challenge. As a ﬁghter I had to have a tunnel vision approach to my career, it was always a simple decision making process ‘will this help me become heavyweight champion of the world?’ If the answer was ‘yes,’ it would happen, if not I would pass.

The same was the case ahead of Goliath, my schedule would be planned around key tournaments and I surrounded myself by the best players in the world. To be the best you have to learn from the best. No stone was left unturned! I even turned my gym car park into a poker lounge just to ensure I could play enough – you wouldn’t recognise it!

How did the relationship with Audley – a previous nemesis – help you during your time learning poker? Can you speak about of the other people that helped you on your way?

Audley and I go a long way back, ﬁrst meeting as amateur boxers working our way up the rankings. He was a little older than me, but we always got on really well. Whilst as professional’s we fought each other in my second world title defence, I always had a lot of respect for Audley and how he managed his own career.

He was an amazing mentor during this poker journey and I really do credit him with the success I had. He spoke my language, was incredibly patient and worked in a way that meant I fell in love with the game. I was very fortunate to meet and learn from some of the world’s greatest poker players. I was incredibly fortunate when they heard of my challenge they were keen to help in anyway they could.

Antonio Esfandiari who has won the biggest ever cash jackpot hosted a private game at his family home simply to help me learn; Former WSOP Champion Scott Blumstein was always on the end of the phone to help me analyse my hands and Jeff Gross, who has won over US$5m in his career making it to an incredible ﬁve WSOP ﬁnal tables, helped with extra workshops in Vegas, and came to London for a strategy workshop before I went into day two of Goliath short staked!

What is the goal for this year’s Goliath poker tournament?

I’d never aim for anything but to win.

Do you have any advice for poker players looking to take on Goliath for the ﬁrst time?

Immerse yourself in the game. Play, make mistakes, learn from them. Speak to professionals and start thinking like them.