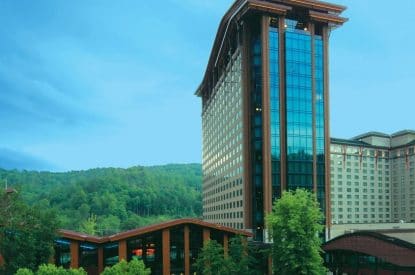 North Carolina Governor Roy Cooper has signed in a sportsbetting law allowing the Eastern Band of Cherokee Indians to offer land-based sportsbooks at its two casinos in the Appalachian Mountains.

Mobile and online sports betting will not though be allowed though at Harrah’s Cherokee or Valley River. The two casinos, which hold a monopoly in the state, are operated by Caesars. Harrah’s Cherokee is located on the Qualla Boundary in Cherokee whilst its sister property, Valley River, is located in the mountains, town of Murphy, close to the Nantahala National Forest.

Brooks Robinson, Regional Senior Vice President and General Manager of Harrah’s Cherokee Casinos, said: “This is an exciting time. We continuously work to offer new experiences and opportunities to our customers and are confident that our new sportsbook will be an added delight for our guests and sports fans.”

The bill was introduced in February by State Senator Jim Davis and passed in the State House 90-27 on July 15, after passing the House Senate on April 9.

Principal Chief of the Eastern Band of Cherokee Richard Sneed praised the speed of the bill’s passage.

“It demonstrates the relationship that exists on a government-to-government level between the Eastern Band of Cherokee Indians and the state legislature in Raleigh, which also really mirrors the government-to-government relationship that we have on the federal level,” he said. “If you make a comparison, it’s easier to get a bill through in Raleigh than it is in D.C. Things are so polarised in D.C. right now, it’s very difficult to get anything approved.”

Bill Miller, president and CEO of the American Gaming Association, added: “Legalising sports betting in North Carolina is a welcome step in the fight against the dangerous, illegal market. Providing North Carolinians with legal alternatives to illicit offshore operators will help safeguard consumers and the integrity of the games, advance responsible gaming initiatives and give state and federal law enforcement an advantage in combating illegal gambling.”

Estimates pitch revenue from the two casino’s sports betting efforts to reach $14m, meaning the state would receive be between $1m and $1.5m each year.

Senator Jim Davis said: “I’ve been a champion for expanding gaming opportunities for the Eastern Band of Cherokee Indians for years. They’ve been a great economic generator for the Western region of our state, and I’m happy to play a small part in the good they do for this region.”

Republican Harry Warren added: ““North Carolina is growing very rapidly the last few years and they’re moving from states that offer more gaming activities than we do. At some point, there will be petitions made to expand the types of gaming we’re doing, in particular with sports betting, and I think it’s critical we act now to establish a gaming commission that will be experienced in how to vet and regulate any type of activities the General Assembly might elect to expand into.”
Online and mobile sports betting won’t be allowed as whilst Daily Fantasy Sports won’t be prohibited.

“Fantasy sports will continue to operate in the state,” Mr. Warren said. “We just haven’t decided to address it yet.”